Back to William's story

William N. Watson, 68, passed away February 6, 2020, at home in Gallup, N.N., of natural causes.
Bill was born in Danville, Ill., the son of Norvel and Ruth Watson.
Bill is survived by his daughter, Hannah Watson of St Joseph, Ill.; brother, Dennis Watson of Westville; sister, Linda Meranda, nephew, Eric Meranda, both from Kenosha, Wis.; and niece, Erin Meranda of Houston, Texas.
Bill attended Westville schools, Southern Illinois University and SIU Medical School in Springfield, where he earned his nurse anesthetist certificate.
Bill, captain in the United States Army, was a proud combat veteran. He was the recipient of the Bronze Star in the Gulf War.
He loved to fish and his three dogs accompanied him everywhere.
He was preceded in death by his mother, father and sister, Suzanne Hawker of Danville.
Published on February 14, 2020
To send flowers to the family of William N Watson, please visit Tribute Store.

Send flowers
in memory of William

Bill Wink
I served with Bill in Desert Storm. We were CRNAs with a forward surgical team. I probably spent 24 hours a day with him for eight months. Bill was a dependable friend, a true comrade. We’ve kept in touch monthly since then.
I will miss him sorely. 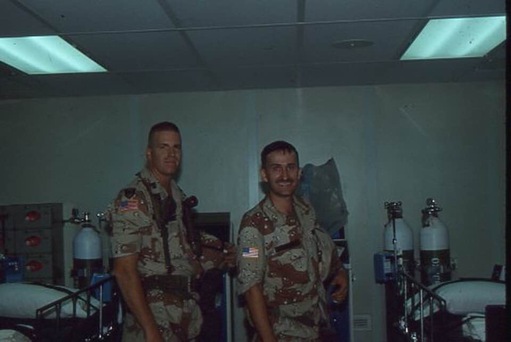 Mark Tovey
Bill “Doc” Watson was as good as it gets as a teammate, friend, and man. The football times at WHS were a treat when a guy like Bill was part of the mix. Bless his family and all those who were such true comrades.
View all