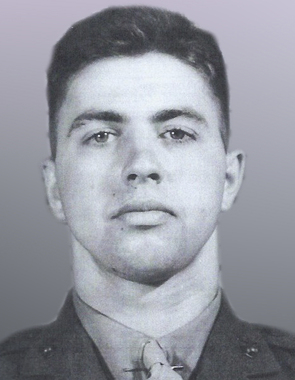 Back to PFC Jack's story

DANVILLE - Private First Class Jack Benson Van Zandt, United States Marine Corp, was born on Oct. 8, 1921, the third child of Blanche Marie (Youngblood) Van Zandt and George Washington Taylor Van Zandt of Danville. He was killed in the Battle of Tarawa in 1943. The description of the excavation and recovery can be read at missingmarines.com ("The Fourth Row").
PFC Jack Benson Van Zandt is survived by several nieces, nephews, and cousins. He will be reinterred at Sunset Memorial Park in Danville, 3901 N. Vermilion St., on Dec. 17, 2019, with Full Military Honors.
Jack preceded all three of his siblings, George, Jr., Aileen Marie Van Zandt Richards, and Lois Jane Van Zandt Wright in death. Lois Wright died on Oct. 4, 2019, just two days after the family was notified that Jack's remains were recovered.
Jack grew up on the family farm in the Batestown area of Danville. He graduated from Oakwood High School in 1939. A few years after graduation, he moved to Indianapolis, Indiana where he secured a job with Eli Lilly. At a time when all young men were enlisting in the service, he asked his parents to sign papers for him to join the Marine Corp Reserves. Jack joined the Marine Reserves in May of 1942 in Indianapolis, Ind. Only a few months later, a National Emergency was declared, and he was called into action.
PFC Jack Benson Van Zandt, USMC was part of Company A, First Battalion, 6th Marine Regiment, Second Marine Division, Fleet Marine Force assigned to the Pacific. His first battle was in Guadalcanal and he survived that battle. The survivors of that battle were given an extended leave in New Zealand and Australia. Then, PFC Jack Benson Van Zandt was to be part of the battle at Betio Island, Tarawa Atoll, Gilbert Islands (now the Republic of Kiribati). Then on Nov. 22, 1943, at age 22 years, PFC Van Zandt was killed fighting for a one and ½ half by ½ mile strip of land the U.S. needed for an airstrip.
History Flights, a private, non-profit, recently uncovered 1,100 remains of long-missing U.S. personnel from the Nov. 20-23, 1943, Battle of Tarawa. With the extreme environmental conditions in the South Pacific, the servicemen's remains were hastily buried in trenches. For over seven decades, few Americans, including the families of the missing, were aware that Marines remained buried on or near Betio. Since 2007, History Flights has been actively searching for and recovering remains nearly year-round on Betio.
A Celebration of Life Service will be held on Tuesday, Dec. 17, 2019, at 1 p.m. at Sunset Funeral Home and Cremation Center in Danville, 3940 N. Vermilion St., Danville, with Full Military Honors. Visitation will be held from noon to 1 p.m. prior to services at the funeral home. Reinternment will be in Sunset Memorial Park with Full Military Rites accorded by the United States Marine Corp.
If inclined, memorial contributions to the History Flights would be very welcome to help further excavations all over the world where our young men and women have fought and shed their blood to protect our freedoms. Send to: History Flights, 317 William Street, Suite 1, Fredericksburg, VA 22401, by phone at (202) 498-4447, or online at historyflight.com.

Plant a tree in memory
of PFC Jack

Rob Gifford
I didn't know Jack but am so thankful for the freedoms that his service and death has afforded me, my family and everyone in the US. I am sorry for his death, thankful for the discovery of his remains and final return home. God Bless him, your family and the United States of America!
Brian Fitzgibbons
RIP Marine, Semper Fidelis.
Jeff Stone
Welcome home Marine
Simper Fi
Debbee taylor
Well done soldier. Welcome home!
Norma Davis
Thank you for your service PFC Van Zandt.
Rest in peace.
Charla Rice
I don't personal know you, but I am blessed to find out about you. May you rest in peace Sir.
Ted Gallagher
Welcome home, son.
View all