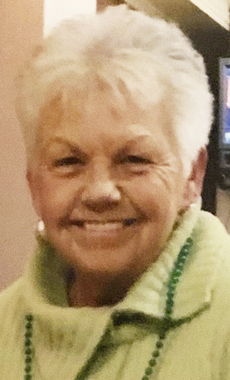 Back to Kay Ann's story

Kay Ann Smith, 77, of Danville, passed away February 12, 2020, at Carle Clinic in Champaign, Ill.
Kay was born November 24, 1942, to Frank and Anna Pinter.
Kay married Bob Constans in 1961, with whom she had her two sons. Their marriage ended in 1980, but they remained good friends. Kay married Marvin Smith on June 25, 1988. He preceded her in death November 23, 2017.
Kay worked at L. Meis from 1985-1989, Valmont from 1990-1994 and FlexnGate for 10 years before she became a homemaker, which she enjoyed.
Kay was a member of Holy Family Church and she enjoyed socializing at the Knights of Columbus and spending time with her friends and family. She was always the life of the party and loved music and dancing. She enjoyed babysitting, playing in bunco club and loved her animals.
Kay is survived by her two sons, Todd Constans (Judy) of Danville, and Brad (Janet) Constans of Plainfield, Ind.; four grandchildren, Jerrica (Chadd) Snyder, Ashley Constans, and Bryer and Tyler Constans; one great-grandson, Emmitt Snyder. She is preceded in death by parents; her daughter, Beth Ann; and her late husband, Marvin.
Arrangements will be handled by Rortvedt Funeral Services and Crematory. Celebration of Life will be at a later date.
Published on February 14, 2020
To send flowers to the family of Kay Ann Smith, please visit Tribute Store.

JoAnn Roberts
Kay Ann was such a good friend to have. Kind and always so much fun to talk and visit with. Although time n distance separated us I thought of her often.
May God bless her family Todd and Bob and their families.
Judy Row (Donkovich)
Kay Ann was a long time friend and she babysat for me as a child. We lived just a street apart in Home Gardens where we grew up. so sad for your loss. RIP Kay Ann.
View all