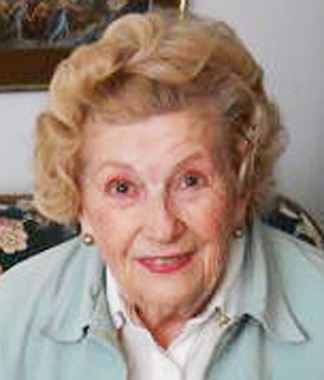 Back to Jane's story

Jane Louisa Starbody, 94, of Bryan, Ohio, passed away Friday, January 3, 2020, at SKLD Nursing Care in Bryan, where she had resided for three years.
Jane was born July 2, 1925, in Decatur, Ill., the daughter of George Earl and June Marie (Hill) Willard.
She married William Lee Starbody on March 12, 1949. He preceded her in death on January 3, 2003.
Jane is survived by her children, Gay Leslie (Dennis) Starbody Fay, of Carmel, Ind., and Jay Louis (Esmeralda) Starbody, of Bryan; four grandchildren, Adam (Delana) Hare, of Nashville, Ind., Holly (Kris) Stenger, of Orlando, Fla., Jaymer Starbody, of Detroit, Mich., and Joyce Pocopio, of Chandler, Ariz.; two great-grandchildren, Karmann and Maxwell Stenger, of Orlando, Fla.; a sister-in-law, Linda Starbody Howe, of Hillsborough, N.C.; two nieces, Jan Todd Wrigley, of Bloomington, Ill., and Vicki (David) Todd Good, of Bluffton, N.C.; and two very special friends who were like family, Mike and Mary Heffernan of Danville, Ill. She was preceded in death by her parents; one brother, John D. Todd; one sister, Joan M. Willard Richards; one sister-in-law, Lillian Higgins Todd; and a niece, Renay Richards Rossi.
She attended Washington University School of Fine Arts in St. Louis, Mo., where she majored in fashion illustration. She was hired as a fashion illustration artist by Famous Barr, also in St. Louis, after graduating. Jane later worked as a freelance artist for Meis Bros., Kays and Deutsch Uptown; an art director and artist for Carson Pirie Scott until it closed; and designed children's clothing and bonnets for Ruth Drappo. Interior decorating was her talent and love. She was an employee of The Furniture Forum until it closed in 1980.
She was a former member of many groups, including the Danville Art League, Governor Bradford Chapter of the Daughters of the American Revolution, Red Mask Players, The Old Towne Preservation Society and was a supporter of the Fisher Theatre Renovation and a member of United Methodist Women, St. James United Methodist Church, Roselawn School of Fitness. She was an avid golfer and a member of the Elks Ladies Golf Association, Harrison Park Woman's Golf Association and the genealogy association for the Willard Family Association.
Jane especially loved her grandchildren and their spouses, of whom she was very proud for all of their accomplishments.
Jane will be interred at the VA National Cemetery in Danville, Ill., where a memorial service will be held at a later date.
In lieu of flowers, the family asks for memorials to St. James United Methodist Church or The Old Towne Preservation Society, both in Danville.
To sign the online register or to send condolences, please visit www.krillfuneralservice.com
Published on January 10, 2020
To send flowers to the family of Jane Starbody, please visit Tribute Store.

Send flowers
in memory of Jane

Jerry Anders
Sorry to hear of your loss Jay .
Diana Carey
Gay, Having lost my mother in 2008 I know that there are no words that will ease your feelings of loss and grief. We don’t seem to realize how very special our mothers are, no matter how much we love them until they are gone. All of a sudden it’s as if we have to grow up. We may not have even relied on her, but we knew she was there for us. God bless you and your family during this time of loss. Hugs and prayers, Diana (Dee)
Linda Simmons
So sad to see this. I knew Jane very well from DAR. She was a sweetheart and talented lady! Rest in peace Jane.
View all