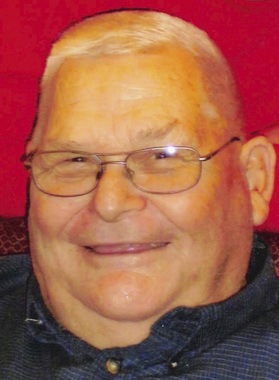 Back to Harlan's story

Harlan Howard Thornsbrough, 91, formerly of Alvin, passed away at 10:15 p.m. Saturday Feb. 8, 2020, at The Waters of Covington. He was born March 5, 1928, on a farm east of Alvin, the son of Ennis and Evelyn (Hughes) Thornsbrough. He married Vernice Wylder on June 1, 1947, in Alvin. She preceded him in death on July 4, 2011.
He is survived by one daughter, Ginger (Ronnie) Mack of Covington, Ind.; one son, Steve (Marie) Thornsbrough of Alvin; three sisters, Shirley Stephenson of Alvin, June Cain of Pittsboro, Ind., and Jo Lynn Sutton of Alvin; one brother, David (Carolyn) Thornsbrough of Alvin; three grandchildren, Brock (Amie) Thornsbrough, Brad (Michell) Thornsbrough, and Marcy (Martin); one grandson-in-law, Paul Powell; 11 great-grandchildren, Lauren, Brooklyn, Nathan, Evan, Josh, Mia, Peyton, Paige, Arieal, Chian, and Lanie; and several nieces and nephews.
He was preceded in death by his parents; infant son, Howard; two brothers, Wayne (Bess) Thornsbrough and Jay Thornsbrough; three brothers-in-law, Wally Stephenson, Butch Cain, and George Sutton; and one granddaughter, Brittany Powell.
Harlan was a life-long farmer. He previously served as a Trustee on the South Ross Township Board, was a past-member of the Alvin Grade School board, served as a volunteer firefighter on the Alvin Fire Department, and drove for the Red Cross. He was a member of the Alvin Christian Church where he had served as a deacon. Harlan enjoyed racing stock cars, late models, and midget cars with his son. He also loved watching sports, especially basketball.
Cremation rites will be accorded. A graveside service will be held at 11 a.m. Friday, Feb. 14, 2020, at Bethel Cemetery in Alvin, with Harlan's grandson, Brock Thornsbrough, officiating.
Memorials may be made to the Alvin Christian Church ,109 Center St. Alvin, IL 61811.
Please visit www.anderson-funeral-home.com to view Harlan's eternal tribute page and to send the family condolences.
Anderson Funeral Home in Hoopeston is handling the arrangements.
Published on February 11, 2020
To send flowers to the family of Harlan Thornsbrough, please visit Tribute Store.

Send flowers
in memory of Harlan

A place to share condolences and memories.
The guestbook expires on May 11, 2020.