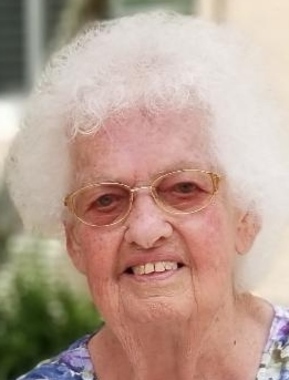 Back to Doris's story

MAITLAND, Fla. - Doris G. Jenkins, 96, of Maitland and formerly of Cayuga, Ind., passed away at noon EST Friday, January 17, 2020, at Savannah Cove of Maitland in Maitland, Fla.
She was born December 14, 1923, in Stewardson, Ill., the daughter of the late Adran and Ethel Elliott.
She married John S. Jenkins on June 8, 1947, in Cayuga, Ind. He preceded her in death on July 6, 2013.
Survivors include one daughter, Iris (Vern) Cutshall of Orlando, Fla.; son-in-law, Lester Burch of Lafayette, Ind.; two grandchildren, Sarah (Mark) Griffin of Denver, Colo., and Samuel Cutshall of Orlando, Fla.; one great-grandson, Hunter James Griffin of Denver, Colo. Doris was preceded in death by her daughter, Rose M. Burch; sister, Marie Bensing; and brother, David Elliott.
Doris was a member of Cayuga Presbyterian Church. She was a veteran of WW II, serving in the United States Navy.
Doris graduated from Cayuga High School in 1941. She enjoyed going to flea markets, antiquing and wintering in Florida.
She and her late husband were the former owners/operators of Jenkins' Sundries in Cayuga.
Funeral services: 2 p.m. EST Saturday, January 25, at DeVerter Funeral Home in Cayuga. Officiating: Rev. Brian Bartlett. Burial with honors: Thomas Cemetery in Newport, Ind. Visitation: noon EST Saturday, January 25, until time of services at the funeral home.
Contributions may be made to Cayuga Presbyterian Church, PO Box 386,Cayuga, IN 47928-0386. Condolences: www.deverterfuneralhome.com
Published on January 22, 2020
To plant a tree in memory of Doris G. Jenkins, please visit Tribute Store.

Plant a tree in memory
of Doris

A place to share condolences and memories.
The guestbook expires on April 21, 2020.