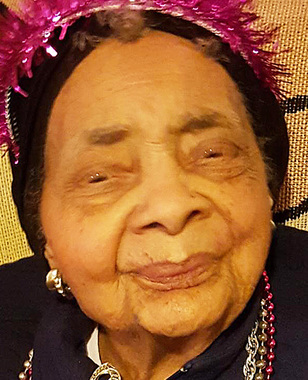 Back to Alma's story

Alma E. Richard was born December 26, 1920, to the late Augustus M. and Mertis (Gatlin) Halthon in Magnolia, Miss.
Alma Richard completed her formal education at Sacred Heart Catholic School in Magnolia, Miss., including earning qualification to teach. For a brief time she served as a teacher in Osyka, Miss., teaching the fifth grade in a small, segregated school.
On December 31, 1940, Alma was united in Holy Matrimony to Felder Richard Sr., in Magnolia, Miss. They soon moved to Danville, Ill., to begin their married life.
Alma worked as supervisor of food preparation for the Hotel Wolford, later leaving to become a full-time homemaker and care for her children. As her children became adults, along with her grandchildren, she was inspired to become a foster parent to other children, as we all know she had unending love for children.
Mother Richard loved the Lord and put God first in her life. Along with her husband, Elder Richard, they were members of Mason Temple C.O.G.I.C in Danville. Later they built and were founders of Richard's Temple C.O.G.I.C, which was located at 430 Love St. in Soldier's Home. There they praised the Lord and lifted up God for many years!
On January 16, 2020, at 6:50 a.m., Mother Alma Richard, at the age of 99, passed away peacefully at OSF Sacred Heart Medical Center, Danville.
Mother Alma Richard's life and legacy will be forever remembered by her surviving three sons, Felder (Carolyn) Richard Jr., Kenneth Richard both of Danville, and Simeon Gary Richard of Springfield, Ill.; five daughters, Erma (Ken) Flye of San Antonio, Texas, Ernestine Tribbet, Sharon Kay Young, both of Springfield, Alma Y. Richard of Danville and Kathy Richard of Springfield. She was preceded in death by her parents; husband, Elder Felder Richard Sr.; brother, Augustus "Bub" Halthon; sister, Ernestine Lewis.
We love you dearly Mother. Your love for all us was the greatest of all! Rest in peace with the Lord! Your Children, Grandchildren and Great-Grandchildren.
A Homegoing Celebration will commence at Noon Friday, January 24, at New Life Church of Faith, 1419 N. Bowman Ave., Danville. Visitation will begin at 11 a.m. until the time of the service. Officiating pastor: Rev. McArthur Pendleton. A public viewing will be 1-4 p.m. Thursday, January 23, at Leek & Sons Funeral Home, 304 E. Williams St., Danville. Interment: Danville National Cemetery.
Condolences can be sent to http://www.leekandsonsfuneralhome.com
Published on January 21, 2020
To plant a tree in memory of Alma Richard, please visit Tribute Store.

Plant a tree in memory
of Alma

A place to share condolences and memories.
The guestbook expires on April 20, 2020.